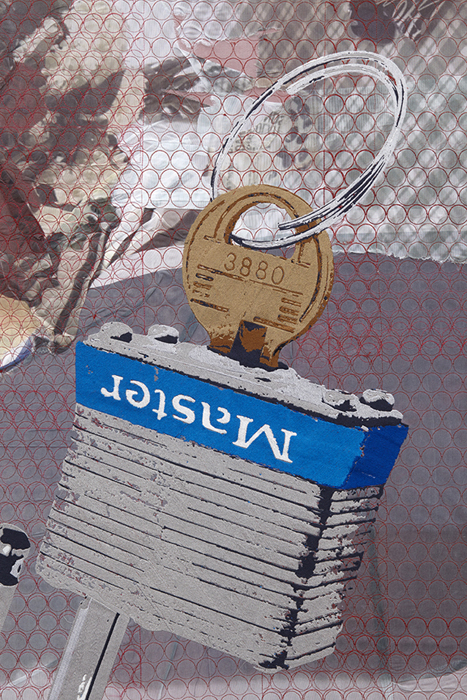 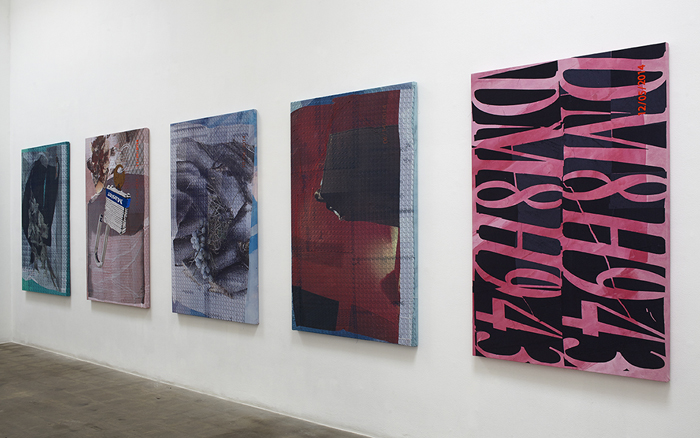 Richard Telles has presented a solo exhibition by Brendan Fowler, his first with the gallery, which featured a suite of new embroidered pictures, sampler-based sound works, and wooden benches. Operated by the gallery staff, the sampler was equipped to perform a group of six ever-morphing sound works composed by the artist, each one never playing the same way twice. Extending a corollary between the facture of his paintings and sound, Fowler further staked his interest in the tension between spontaneity and control, performance and the quotidian.

Ever gleaning from the memory card of his point and shoot camera, the fount of his daily archive, Fowler printed these images onto fabrics, which are embroidered onto canvas using the line-art of common domestic patterns—often “offregistered” as the ghost of the silk-screen print.

Also capable of reproducing photographs with thread, the embroidery machines under Fowler’s care continue to exploit the distinct banality of “gonzo” imagery in his new pictures. These machines are industrial-level, but whose aim Fowler has reversed: commonly used for mass-produced hats, sweatshirts, and other sportswear, to emblazon them with logos and graphics, Fowler used the machine to create a unique ‘painterly’ object. Through its inherent technical glitches and soft material—colored thread—it renders the image tactile, not usually within the digital picture’s realm, while also making its approximate impression of photo-realist painting or the analog print.

The digital programming for the embroidery machine and the sound sampler interweaved a hidden formal structure for the show as a whole. For the paintings, Fowler programed the movements of fifteen needles threaded with different colors of his choosing. As for the sampler, Fowler was able to play twelve samples through ten different data banks. In both machines he inputed sets of data, which were then subjected to a wide range of manipulations through choices, glitches, and physical re-presentations. The nexus between the spontaneous (i.e. realizing the work as it’s being made through “intuition”) and the rigid control of set data schemes (the pre-designated structure) is where Fowler’s work runs amok generalized assumptions about authorship, appropriation, and personal agency. In a culture that encourages personal agency, yet represses it in a panoply of ways, Fowler subverted this with joyous abandon.

In 2014 Brendan Fowler was included in the group exhibition “New Photography” at the Museum of Modern Art, New York, among others, including the Gemeente Museum, Den Haag, Holland, L&M Arts, Los Angeles, and Marlborough Chelsea, New York. His recent solo exhibitions were held at LAXART, Los Angeles; the MIT List Visual Arts Center, Cambridge, MA, in 2014; and at UNTITLED, New York in 2013. Fowler lives and works in Los Angeles.